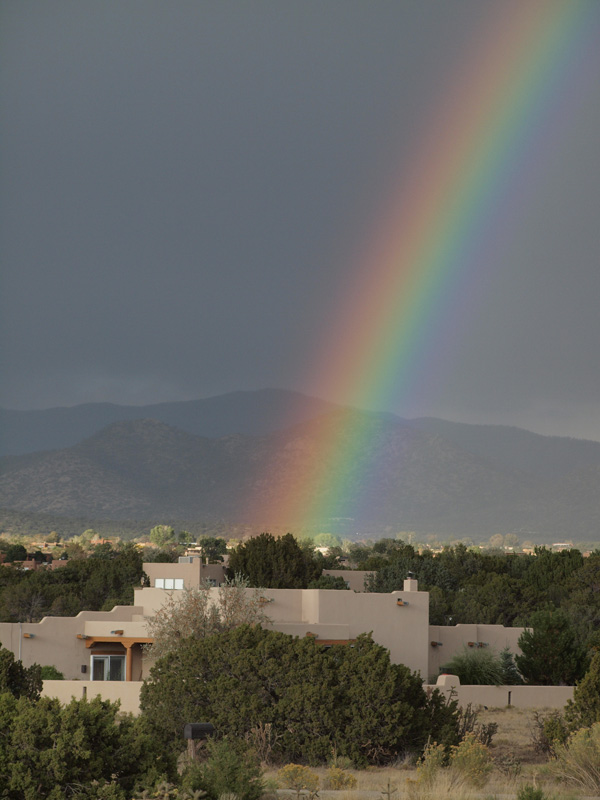 Yes, this was amazing. And more amazing was that it was a full rainbow – brilliant all along its arc across my neighborhood. Even with the very wide angle of the iPad camera, I could not capture the whole thing in a single shot, so I took several – which I will try to stitch together in Photoshop, and share if I can make a success of it. The photo above, I shot with my DSLR.

Of course, I ran right over there and found a huge pot of gold.

I don’t know if there is a greater treasure than the ability to live simply – even if you live a very complicated life.

To observe just one thing at a time.

To feel just one thing at a time.

To think about just one thing at a time.

To process just one thing at a time.

Only a hundred years ago, most of us lived in rural communities, and many of us on farms and ranches that were quite isolated from the rest of the world.

Every few months or so, a traveling salesman would come along and bring us the only news we got from outside our own small town. He often was invited to sit a spell and tell us all about it. We maybe picked up 5-10 “information bits” – in exchange for a cold drink or a warm supper.

And then, we had a few months to ponder, process, and figure how these new thoughts might effect us, before the next “news” came along.

That was pretty much how information got around for the the first 200 thousand years or so of homo sapiens history – word of mouth. There was no information highway – just an old dirt road.

And then came the past hundred years.

Back in the late 70’s, when I was teaching a high school sociology class, I asked my students to count the number of information bits they picked up in just one day. Encounters with other people counted, advertisements of all kinds counted, TV counted . . . etc.

The totals were in the thousands – in one day.

And that was before the coming of the digital age.

Now, we are constantly bombarded with info bits when our senses are open for business, and even our sleep time is used trying to process them.

It’s no wonder we feel so nuts.

#1. Give up on the idea of processing and retaining it all, or even most of it.

We are the same biological critters we were a hundred years ago.  In other words, our hard drives and CPUs have not been updated to deal with all this. Our operating system is still Version 1.0, for heaven sakes. We haven’t got a chance.

It’s sort of like trying to surf the web on the first Macintosh.

#2. Forgive yourself for forgetting.

So you walk in the other room and have no idea why you went in there.

That’s not you losing your mind. It’s your mind’s attempt to divide one thing from another in some way, because it can’t cope with the confetti storm of info bits it is expected to gather and sort.

So, you have a different shoe on each foot or a different earring in each ear. You aren’t the only one.

Sit yourself down and count your fingers and toes. If you come up with 10 each, you are still processing ok.

Now, stand up and try to take one thing at a time.

You can’t have it all and you don’t want it all.

So, choose an info bit that really has meaning for you, and dive into it. Immerse yourself in it, and process it then and there, so it doesn’t become part of your mental flotsam and jetsam.

If it is a creative idea, go ahead and try it – right then. Yes, you do have time because you are not going to pay attention to those other million things.

A favorite quote of mine (source unknown):

“A genius is one who learns more and more about less and less until he knows everything about nothing.”

12 thoughts on “From Somewhere Under the Rainbow…”