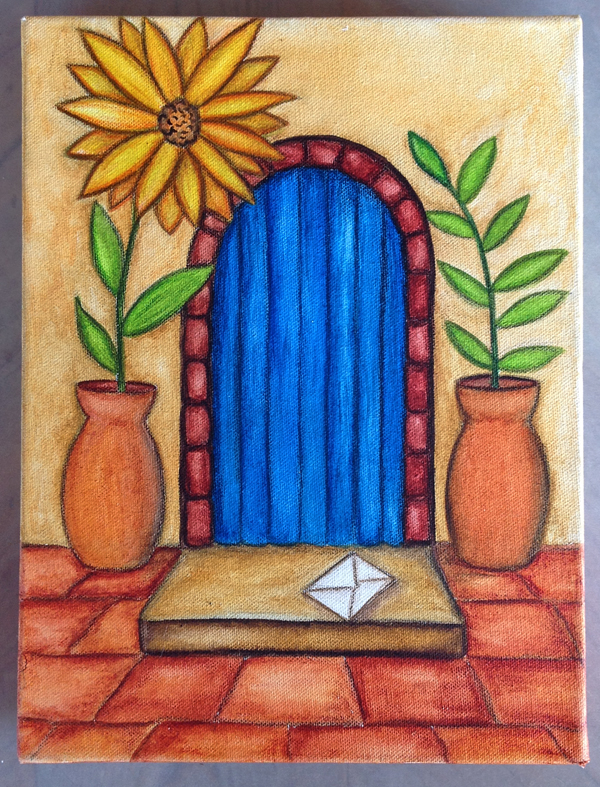 I mentioned before that the blogs I love to read are those that talk about an aritst’s process – the thinking that goes into creating. I hope you find that kind of thing interesting too, because I am about to share some process with you.

Firstly, after 35 years of trying, I have managed to find a way to paint with water media on canvas. That is an exciting thing which I will revisit at another time.

Today I want to talk about cute.

Those who know me well, know that I struggle with cuteness in my “serious” art. In fact, I can’t seem to do much “serious” art because a touch of the Disney-esque always seems to get in there – even when I paint in a hyper realistic style (not the case here, obviously).

Somewhere along the line, I picked up the idea that there must be some angst in serious art. A famous quote I have never forgotten was in an essay by naturalist Donald Peattie:

“A poet should always be hungry or have a lost love.”

But I have never been a real starving artist, struggling to release the passions of my soul. At least, I don’t think I have. I have written a few folk songs about lost love, but I never created any paintings about it.

Art, for me, has always been pretty joyful. And those lost-love songs were actually pretty cute, come to think of it. One was about falling in love with a Ladybug (a MALE Ladybug – imagine the angst he must feel! Enough to create serious art, I bet.)

Anyway, back to the process thing. It’s weird how it goes back and forth. I have been wanting to do a blue door painting since I did the cover drawing for my

which had a large cuteness factor.

So, I wanted to make the painting more serious, and also try out a new idea I had about adding a 3D element – a lock on the door. Therefore, the door in the painting has no knob.

As I am going along, a new title hits me – “The Door That Would Not Open”.

Now, there’s a serious title for you, right?

I have always loved titles. Like other Surrealists I admire, I think titles are a very important part of the artwork. (I am a registered Surrealist with the Museum of Modern Art in San Francisco – at least I was back in the 80’s. My serious Surrealist paintings then were a lot more weird, but still had a cute factor!)

Anyway, I think Surrealists love titles because they either help explain what the heck is going on in the painting, or they add another level of strangeness. René Magritte gave titles to his paintings that had nothing at all to do with the subject, or actually opposed the subject – like “This Is Not A Pipe”, when surely it was.

Titles usually come to me somewhere in the process of painting. I have been known to shamelessly change the whole direction of a painting in honor of a good title.

I added an envelope on the porch step. Now, we have a whole new level of what it means that this door won’t open. Now, we’re getting serious.

But, the painting is done on a gallery canvas, so I continued around the edges just for fun . . . 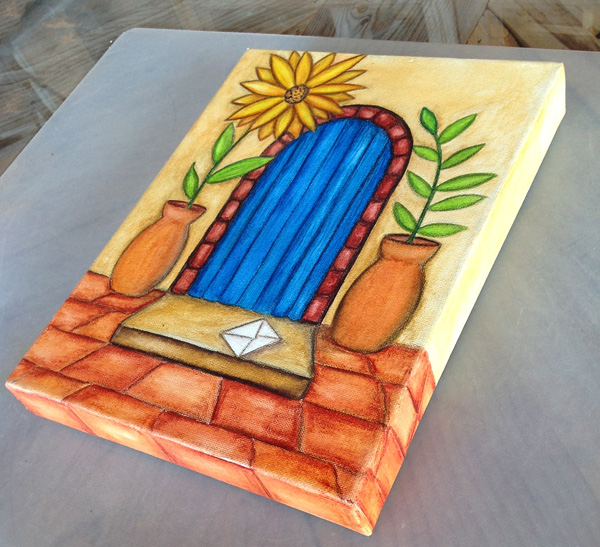 Now, we have 3D – even though it is an illusion, and we are back to seriously cute. 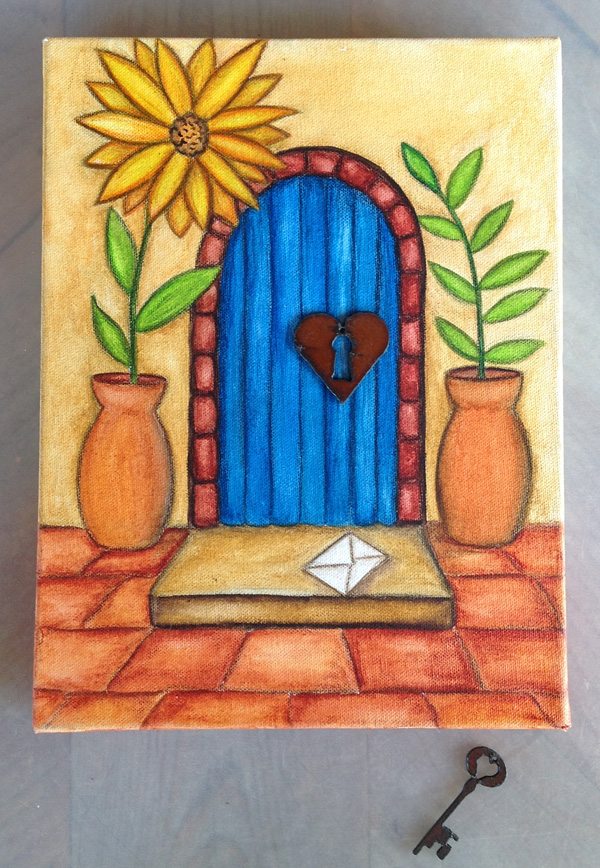 I would hang the key from a small hook I would screw into the bottom of the canvas.

Then, what would the title be? “High Hopes”, maybe?

Obviously, this version is happier (and cuter). It makes you wonder, but not TOO much. It has a future that might turn out a variety of ways. It could have a happy ending.

This would sell faster in the gallery (Mark’s contribution, although I would never let my ART be affected by such a thing, would I?)

“The Door That Would Not Open” is much darker, the future of the story is pretty much a foregone conclusion, and an opportunity has been missed.

It makes the  thing a whole lot more serious.

There is something about the depth of that which appeals to me.

So, here I sit, with hardware in hand, and can’t decide which way to go. If I attach  that lock and paint the canvas black behind  it, I am locked into that version. No going back.

I would love to have your opinion. I’m not saying I will go with the popular vote. I would just love to ponder your input.