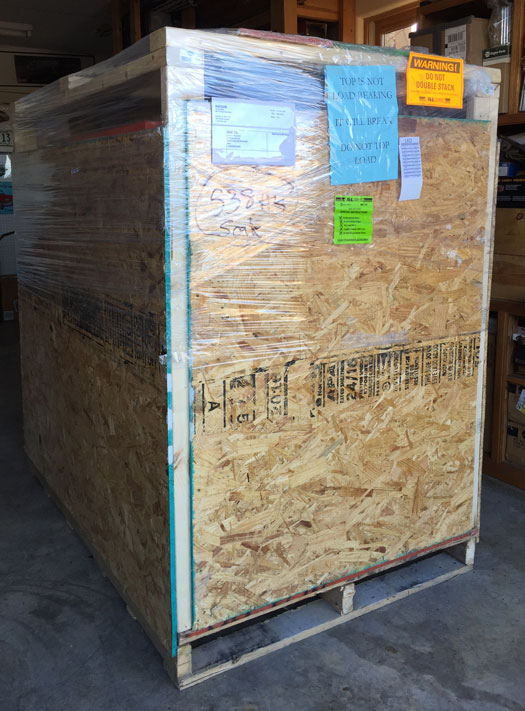 I did it. Bought a big kiln and have nowhere to put it.

I started the studio purge that is necessary to make room for this big boy (about 4 x 5 feet), but didn’t get far enough by the time it arrived.

Also, I neglected to consider that it might come in a crate . . . a VERY big crate!

So, a total lack of prior planning is all.

The truck driver had no sense of humor and was in a hurry, so I had to find a place for him to put this monster – fast.

Good thing Mark has moved half of his ’57 “Chevy-in-progress” to a friend’s shop in town. Yes, it is in two halves currently. I call them top and bottom. He calls them frame and body. The body is still in the two car garage, but the frame is not. So that’s where I had the driver put the crate.

So then Mark came home.

“What are we going to do with that crate?” he wanted to know. “It’s huge!” (This was after he was done huffing and puffing about “territory” issues.)

“How about calling it a tiny house and putting it on Air BnB?” I offered.

He had no sense of humor either.

It’s a problem to be solved, but no hill for climbers, and every time I peek inside the crate, I get excited. This kiln is a work of art.

Of course, it would probably be more exciting to be able to use it to make some works of art.

Thank you for your enthusiasm about the idea of a new magazine.

It was enough to get me going, and I am half done with the first issue already. I love doing it, so if it ends up that my time gets compensated, I will keep doing it.

Stay tuned – it won’t be long.

And, along with all this, I am still making the transition to a new website. I have abandoned SquareSpace because it’s too hard, and have moved on to Wix, which seems easier.

I used it to set up a website for my Vacation Rental in about two hours. Of course I had all the graphics already.

Here’s that website (tell me what you think). I put all the reviews from VRBO in the blog part of the site and I think it looks impressive.

Anyway, pretty soon, we will all move to more exciting platform where we can enjoy slideshows and videos and magazines and who knows what all.

But right now, I have to go clean my garage!!!!