This plant is a Red Hot Poker. It is also called a Torch Lily in some places. I have found it interesting for a long time.

When we bought our home in Santa Fe, in 1996, two of these had been planted on either side of the inside of the gate to the front courtyard. What else had been planted in that courtyard is a nightmare that still haunts me, but that is a story for another time. Except – would YOU plant Piñon Pine trees in a courtyard – in front of the only windows in the house that face your glorious mountain view? Even those two sweet trees were outraged and they died because of it. Because of the placement, not the outrage. Maybe the outrage. I don’t know.

That was a LONG time ago and I am surprised that one Red Hot Poker is still with us – and doing better than ever. It is said on some gardening sites that if you deadhead the torch flowers, the plant will bloom from Spring until Fall. That has never been my experience, so if it happens for you, I would love to know about it  (and where you live. No – I am not planning on stealing your plant – just curious about the possible climate differences) I do deadhead the stalks as soon as the flowers fade because they are butt ugly at that point – just saying. Maybe they don’t rebloom because of my attitude?

This is Mark’s favorite plant in the garden because he LOVES bright colors, and these are amazing. I have never immortalized this plant in my journals, and so this year, I thought it was time.

This is an intimidating display if you are going to give it any detail in your rendering, so it takes some thinking about.

What are the details anyway? 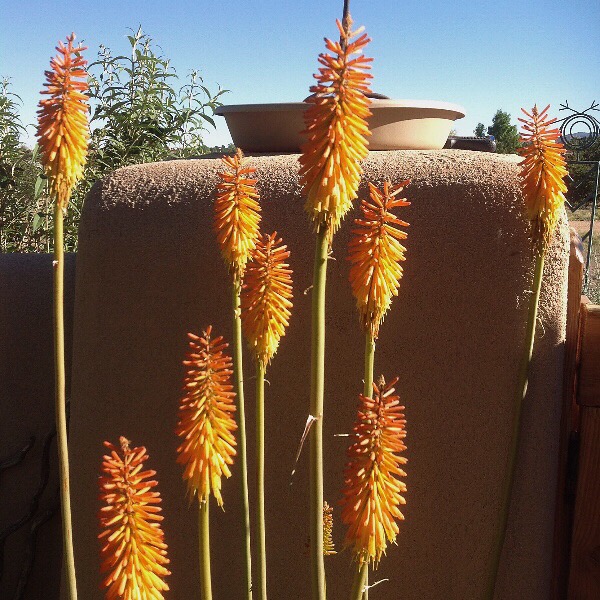 Photo is a bit blurry. You should NEVER try to shoot red, orange, or yellow flowers in bright sunlight (as all my photography students know), because you couldn’t get focus if your life depended on it. But I was trying to just get a look at the architecture here. What are these flowers made of? 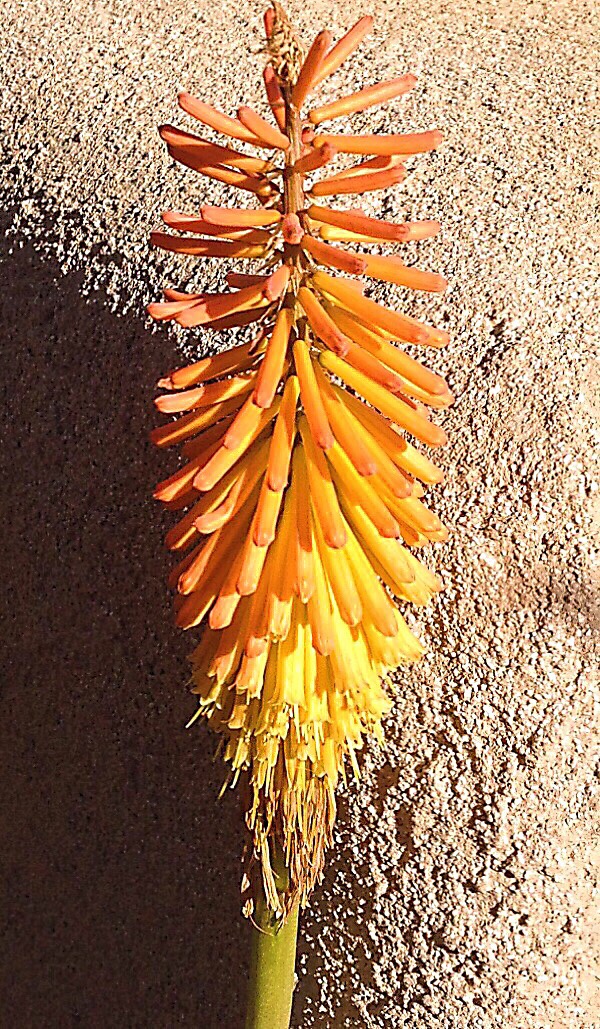 They are made of little tubes in graduated sunset colors. We won’t want to be including all this detail in our sketch.

In fact, the only easy thing to draw on this plant is the leaf structure. The leaves are long and swordlike.

I decided on a loose sketch (loose for me, which is not everybody’s loose!) But I felt that black lines were too stark for this subject.

I have taken a new direction of late, which is using colored inks for sketching.

Until recently, there have been very few colors available in a fine tip permanent marker. Pitt makes a few. Copic makes a few. And Prismacolor makes very few. I’ve been hoping Faber Castelle would put all their colors in Fine Tip like they have in Brush Tip, but so, far there are fewer than ten available.

So, I was very excited to find this set at Flax when I was in California. 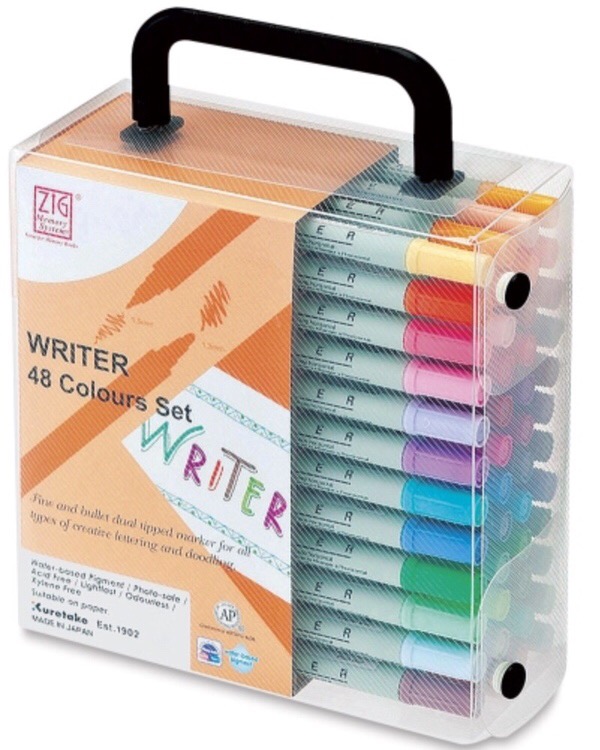 They were a hundred dollars and change and I felt like I was over indulging myself as usual, but they have turned out to be one of the best investments I have made.

The manufacturer is Kuretake, the same people that make the best water brushes in my opinion (Niji).

The palette is great, and while it isn’t very clear on the box, the ink does not run when painted over.

Each marker has two tips: a fine .05 tip and a regular medium marker tip. There is also a good desk stand to keep them handy and neat. 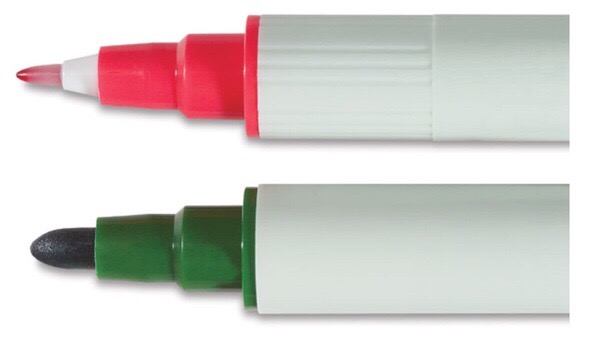 I started my sketch in 3H pencil, then inked the lines in fine tip colored marker, and erased any left over pencil.

I then painted the background with an ochre watercolor wash to indicate the stucco wall that is behind my Red Hot Poker, and blended a green wash wet-in-wet to background the leaves. You can see that the marker lines do not bleed. 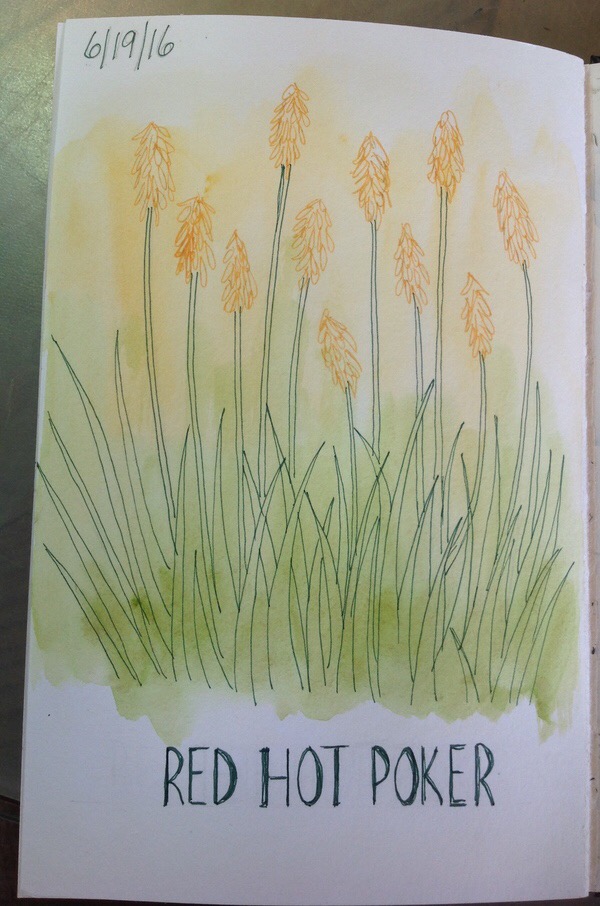 When the wash was dry, I painted the leaves in detail with watercolor. The flowers were done more roughly – indicating the tubular parts more than defining them. The ink lines showing through helped define them. 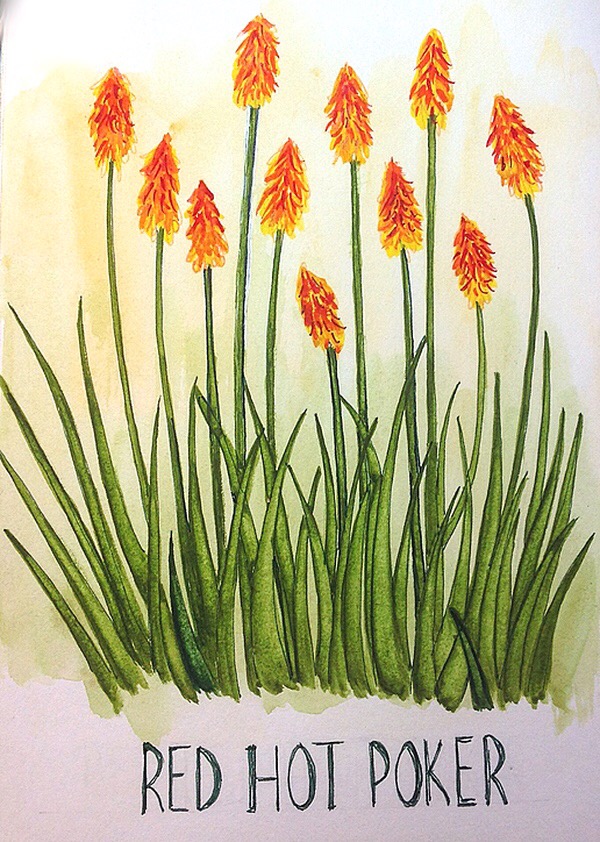 The final result filled a whole page in my Stillman & Birn Beta sketchbook.

This is just one type of garden journal page I enjoy doing – just a big old sketch without a lot of information.