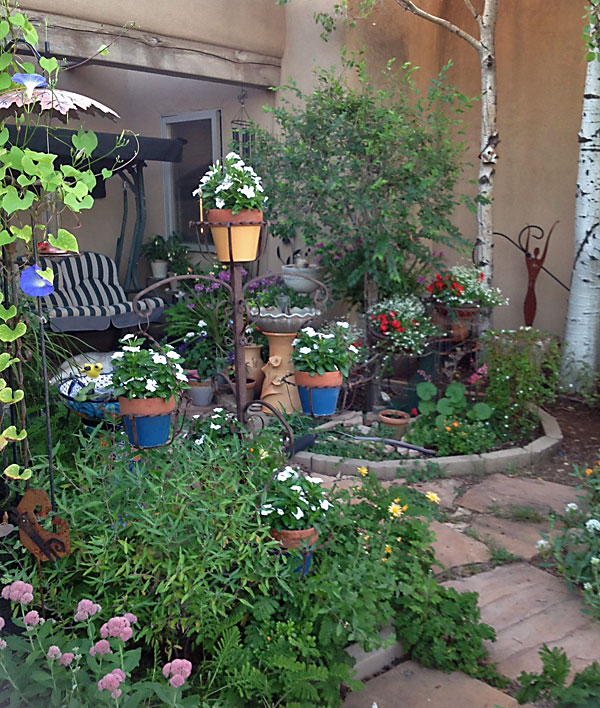 Once upon a time, (Spring 2001, actually), in a Walmart faraway, two women wrestled over a swing in the Garden Department – the LAST swing as it were . . .

OK, so the “wrestling” part might be a bit exaggerated, but the struggle was not. I was one of those women, and I was ready to fight to the finish to have that swing!

Eventually, the Garden Department manager, a peacemaker at heart, was able to find another swing at another store for the other woman, and I got my prize.

It’s been 15 years, folks, and this swing is still on my “Five Things I Cannot Live Without” list – fighting with my iPad for first place, in fact.

Those of you who have been around here for a few seasons, know that my swing, in the corner of my garden, is not only my personal piece of paradise, but also my “studio” from May through October. 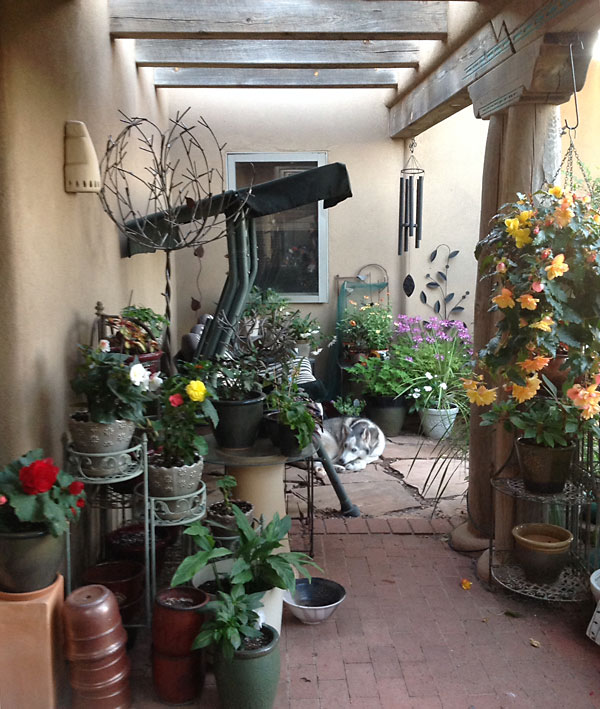 Yes, there is also usually a Husky or two, or three, around the “studio”.

But, here is what my swing looks like before all that gardening gets going . . . 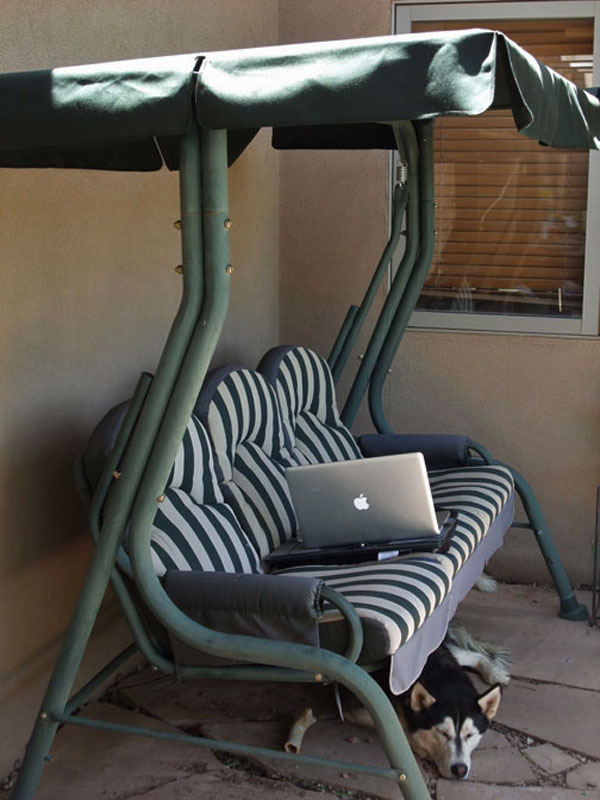 I have replaced the hardware that holds the canopy in place a few times, because our winds here are amazing and the hardware is a hard plastic. Thank heavens, they still make replacements.

One evening a few seasons back, my dear husband came out to sit with me on the swing and chat. I was just telling him how I would make this swing last forever, when he sat down and we both heard a loud snapping sound from the seat under us.

OH NO!! But, it was just a screw that had snapped and we were able to replace it easily. WHEW! DH knew he had dodged a bullet!

I paid about $250 to have a new canopy made – much heavier canvas and waterproof – which the original was not.

All was as it should be in paradise.

But last year, I began to have cushion problems. I keep them inside in Winter, but the fabric has gotten thin and the outdoor critters have made a few incisions to get at the stuffing. They don’t make replacement cushions anymore, so I was thinking about making patches (Ultrasuede with floral artwork transferred on them via Sheer Heaven), when I ran into some very nice outdoor chair cushions at Lowes.

Could they possibly fit? (excited) Are they way too splashy? (worried) Should I buy and try? (brave)

I did – and they fit perfectly. They get the whole garden going on before we have grown a thing . . . or even put the canopy on. 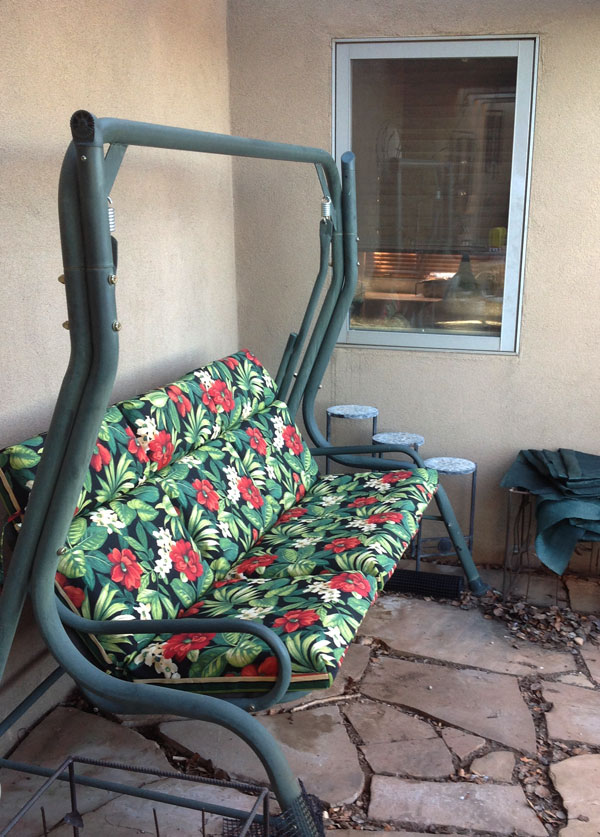 I had debated between the only two patterns that had the dark green I needed to match my swing. Then, because Mark was with me and turned one of the cushions over, I discovered they are reversible and have both patterns. If the floral print gets to be too much, I can just turn them over . . . 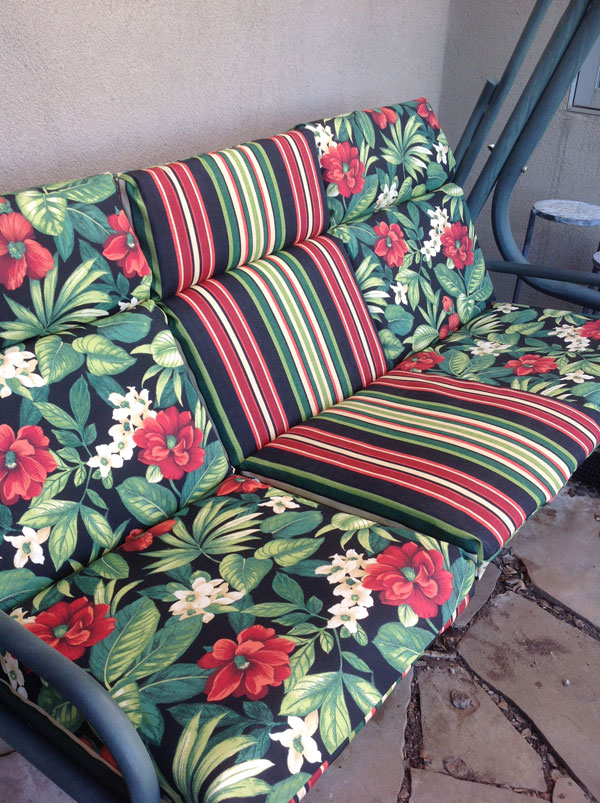 Thinking of sketching the floral pattern in my art journal . . . 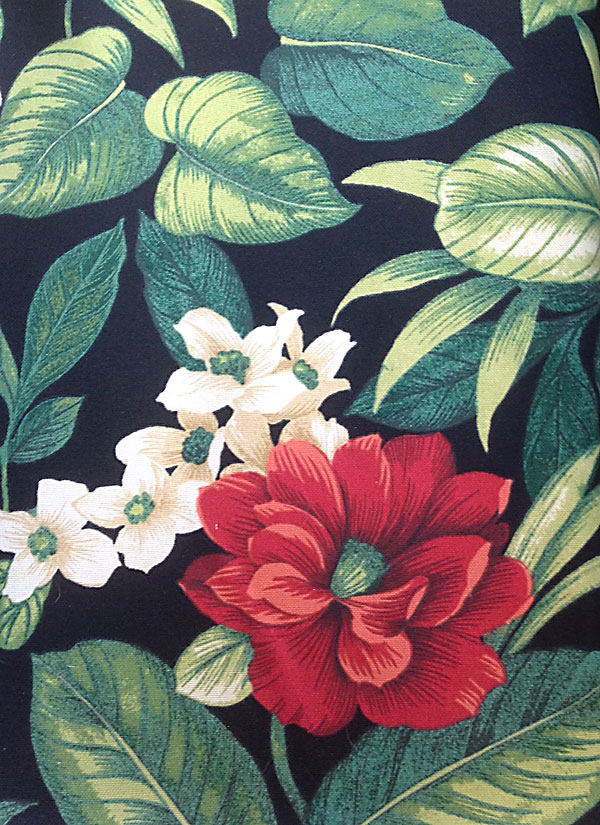 This is my favorite day of the year – Daylight Savings Day. Time to Spring ahead. It’s later than you think today (grin).

While spending all this time appreciating my swing, I was also thinking about our connection to things. I know lots of people are purging and de-collecting, and I am too, but there are things in my life that you better not try to take away from me!

WHAT ARE YOUR FIVE FAVORITE THINGS?

Take some time to think about it and tell us what they are. You can just talk about what’s at the top of your list if that’s easier.

Remember, we are not talking about living things here – just thing things.

Stopping to appreciate what we have is never a bad idea.

We may have too many things, but they aren’t all bad. Some things bring us more pleasure than others, and some we would not want to be without, come hell or high water.

I will share a few more of my favorite things in posts to come.

And I will leave you with this poem that I wrote a long time ago, and many of you might remember if I posted it before . . .

Not politically correct nor environmentally conscious, but this predated the whole idea of recycling, so I’m off the hook.

Have a great Sunday!