Most of the drive across the Panhandle of Texas is a snore (Sorry, Texas – there are parts of you I love, but this is not on the list). Everything is horizontal and the landscape is pretty toasted. But, a little east of Amarillo, a couple of verticals stand out – or stick-up, you might say . . .

Both of these roadside attractions are man made and sorta over produced, and both are within the 3/4 square mile town of Groom, TX. The population was 574 in 2010 and only 565 in 2017. Nine citizens must have gotten bored and moved away – or moved to heaven via this 19 story cross. Or maybe they got bored to death.

Anyway, Dottie and I were no longer bored because there was something to see, and Sky was ecstatic because she would get out of the van for a bit. We arrived as the sun was setting, so the big cross, which appears very white in daylight, was rather dramatically lit, which made me like it more. I like my photo even more. . . 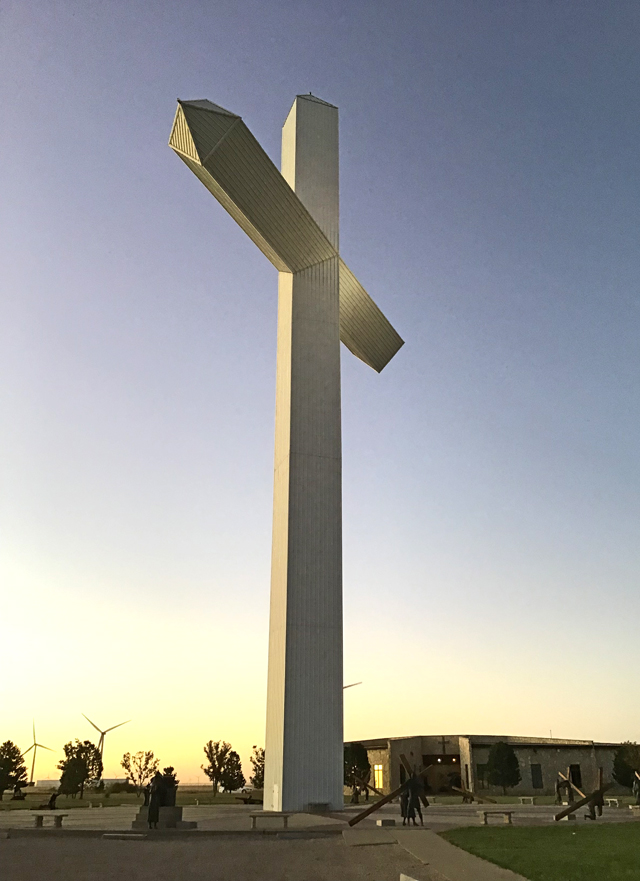 Around the base are life size bronzes of the Stations of the Cross. If you were “raised up” (a Texas term) Catholic, you know what these are, and were maybe made weird by them, like I was in Catholic school. If you don’t know what they are, that’s good. I put only the trees in my sketch. Anyway, these are life-sized statues, and that plays into my story in a minute.

It got darker. Dottie didn’t come back.

We waited, and then we worried a little – then went looking for her.

We kept thinking we had spotted her, but we were spotting the Stations of the Cross people. They didn’t respond when we asked if they’d seen Dottie. We worried a little more.

Then we got back in the van – to make use of the headlights – and we spotted one of the Stations of the Cross people – moving! It was Dottie. She had not been accosted or abducted here in this complex of extreme goodness. She had found a very cool man made rock waterfall (the Divine Mercy Fountain) up in the closed Gift Shop, which is a nice gift shop when open. (I have been to Groom many times in the past, so I know). I once bought something there that became an interesting 6 degrees type story, but I will save that for another time.

This whole complex was constructed by a Group called called Cross Ministries, and the 191 ft cross was erected in 1995. There is another one of these crosses in Effingham, IL – built just a few feet taller by another organization to be the tallest cross in America (198 ft). The Texas cross was its inspiration and also the one to beat.

There is another thing sticking up just past the Cross. It’s a water tower that looks like it’s about to fall down. It was a marketing scheme for a diner located on Route 66 back in the 50’s or so.

Remember how the 50’s were? Sorta sweet naive? Just think of the contestants on the Groucho Marx show. They got pretty excited when a stuffed bird almost hit them on the head. This was way before my time, of course, but I’ve seen the shows on the internet (grin). Remember Queen for a Day? Beaver’s older brother, what’s-his-name? Geez!

OK. So, when 50’s people were driving along Route 66, they thought they were looking at a tower that was about to fall and hurt somebody, and they pulled right off the road to warn the people in the cafe, Oh, and while they were there, they may as well have a bite or a cold drink.

And this was exactly what the cafe owner, a guy named Britten, was hoping for when he moved that tower 38 miles, and planted it at that angle – right by his business. The most interesting thing to me is that he had to keep a certain amount of water in the tower so its center of gravity would keep it from actually falling. I’m wondering whether there is any water in it these days. If not, it might fall. Maybe I should stop and warn somebody. Nobody to warn. The cafe burned down a long time ago.

As I said, I have driven this route for many years. New verticals are showing up in the form of wind turbine towers. Wind turbine towers are over 300 feet tall counting the propellers. Beat that, tallest Cross!!!

PLEASE NOTE: If you ever see a notice about my site not being secure, it’s not true. Servers are updated, but it takes awhile for that to be noted by the bots. Anyway – no worries. Nothing can hurt you here.