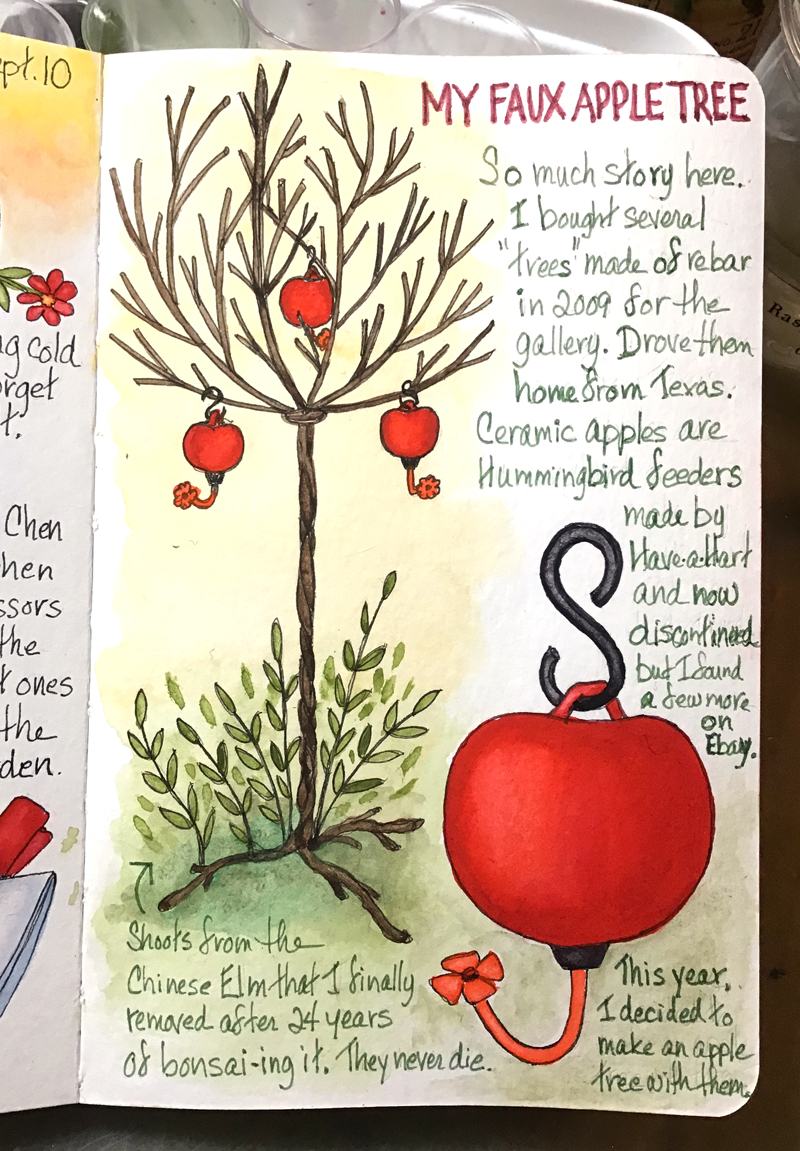 Sketchbook pages save memories of moments – sometimes a collection of moments that span many years and end up combining themselves into a new story . . .

I have three metal trees made of welded rebar. They now grace my garden, but I bought them in the Texas Hill Country back in 2009 to serve as “furniture” in a new gallery location. At that time, there were four and the ordeal of getting them all into the back of the van in an interwoven mass is legendary. So is the ordeal of getting them out again. They are 6 ft tall and 3 ft in diameter. But, the most potent memory was how I almost got T-boned by a truck out of nowhere on a highway outside of Canyon, TX. I won’t ever need a sketchbook page to remember THAT moment! I still have nightmares about how I would have become interwoven with those metal branches.

The first of my beloved ceramic apple Hummingbird feeders was found at my favorite Santa Fe nursery which has been gone for several years now. I got one for myself and my Mom too. Then, I found out they were discontinued (made by Have-A-Hart), and coerced my Mom into giving hers back to me. I was able to find another on ebay. This was way back in 2007 or so.

And the final part of this sketch-tale spans a period of  23 years. When we bought our beautiful home in 1996, I soon discovered that the person who planned the courtyard “garden” must have had bats in the belfry. She planted Pinon pine trees inside the courtyard in front of the only windows onto the mountain view to the North. No sun, no space, and they were sure to die (they did). And she did a lot of other crazy stuff, but the worst was planting a Chinese Elm in the courtyard – three feet from the wall of the house!

Chinese Elms have a voracious root system that seeks out pipes and sucks water away from everything else. Not to mention that they grow huge quickly. This one could have lifted our house into a tree house in no time.

I don’t like to kill living things, so for 23 years, I have Bonsai-ed the Elm, keeping the height to 6 ft by trimming branches three times per season to keep the tree busy growing leaves instead of roots. It made the tree very sad and frustrated, but at least I wasn’t killing it.

This past Summer, I felt I was finally losing the battle, and had my yard helper cut the tree down. Because it left such a visual hole in that part of the garden, I put one of my rebar trees there. I knew it wouldn’t grow out of control and it gave us back the vertical element.

But its branches are perpetually bare, of course. So, I decided to make it a faux apple tree with my Hummingbird feeders.

The Elm is not dead. I don’t think you can kill them by any non-chemical means, and my garden is a no-pesticide bird sanctuary. So the growth you see beneath my fake apple tree is my Elm trying to make a comeback. I won’t let it become a tree again but it can live here and keep trying if it wants.

A lot of our history lives in our sketchbooks. Our sketchbooks tell our stories, and this page has so much story and takes me back to so many times and places that I had to stop and reflect on that.