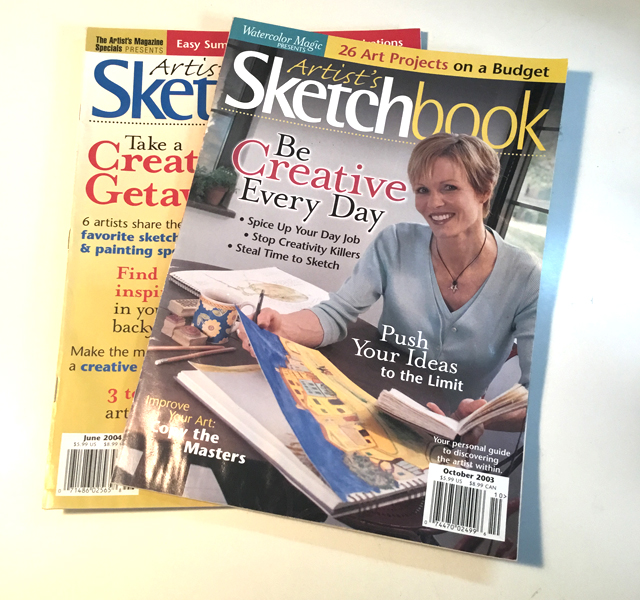 Remember this publication? Way before its time, but it may be time for another one . . .

I have always kept sketchbooks as every artist has. My sketchbooks were not something I revisited after using the notes and rough drawings that were plans for paintings, graphic design projects, etc. They were a mess and not much fun.

By 2001, though, when the folks who publish Artist Magazine came out with this Artist’s Sketchbook magazine, I was already thinking about sketchbooks in a new way.

After 9/11, tourism took a real nose dive in Santa Fe (and everywhere else), some very weird things had happened with the THREE galleries I had downtown, and I knew I was going to take a hiatus from the gallery business.

OK – I’ll share what the weird things were because they are pretty interesting stories, actually:

One location was owned by a B&B next door, and they wanted more bedrooms, so they threw us out. They also threw out the Wyeth (as in Andrew) Gallery that shared the building with us, so we were in good company, but nevertheless, we got thrown out.

The second location was in the Railyard District of Santa Fe, which has now become the new hot spot for contemporary art, but then was in a place where everybody was trying to figure out who actually owned the properties – the city, the railroad, or the landlords who thought they owned them. These things take a long time to decide around here, and meanwhile, the roof on our building leaked terribly. So badly we had one of those backyard pools with the 3 ft walls in the middle of the gallery to catch the water.

The landlord did not want to replace the roof because he didn’t know if he owned the building. So, his solution (this stuff only happens in Santa Fe), was to plant a garden on the roof. They hauled all kinds of dirt up there and planted stuff. That was supposed to absorb the rainwater. Instead, it mixed the rainwater with mud, and THEN sent it down through the roof into our gallery. We did not renew our lease.

The third location was in a darling garden setting with brick floors, French doors, etc. It fronted a parking lot, and we were visible to all the foot traffic on a popular downtown street. Our own landlord decided to put up a new building in the parking lot – edge to edge. You could not even find us with GPS, which was not available to us common folks then anyway.

A hiatus was essential. We needed to rethink everything.

So, I went home and launched Cre8it.com and Sheer Heaven, and became an online business, and got to know many of you – way back when!

And that was all fun, but what to do with my paintings? I did not want to work with other galleries because I was way too cantankerous after having my own for so long.

Selling art online was not a thing in those days, so I painted for the future (knowing I would have a gallery again someday) and put the painting in a closet and felt bad about it. So I stopped painting altogether.

Right about then, I ran into a couple of publications about visual journaling, and got interested in making art in books – just for the hell of it.

When I saw the Artist Sketchbook magazines, I bought them all.

But they were disappointing. There was no real audience then, and not many sketchbooks of that type to feature – and most of them were black & white. So, the magazine did a lot of filler stuff – like how to parent and be an artist, how to paint with acrylics (not in sketchbooks), and so on. Unbelievably, they published until early 2006, but were still ahead of their time. 56 pages per issue, half advertising.

Today, the interest in sketching, art journals, and “real” art made in books is HUGE, but there is no magazine dedicated to the subject. Plenty of books on sketching, but no magazine. (Stampington’s Art Journaling does not count. That’s all about a different kind of thing, not sketching.)

So, I am going to try to make a sketching magazine happen.

I actually have the first issue about 85% complete. It will be a downloadable PDF format because that is my favorite type of publication. You can read it on any devise, or print the pages you want to print. You can enlarge any page so you can see it better, and do screenshots to work from. I have been creating PDF magazines since I got online and PDF is just the greatest. It will be 50-60 pages per issue with no advertising. I’m closing in on this idea.

And then, yesterday, in a conversation with another sketch artist, I was asked who my demographic is and whether I knew what would make them spend $8.50 for a magazine devoted to making art in books.

What would my readers want to find?

I have a pretty good idea, and I sure know what I would want, but instead of trusting just that, I am going to ask you.

I know some of you may have no interest at all in sketching, art journaling, painting and drawing in books. But, I also know that most of you do. At least you might like to try it even if you haven’t gotten started yet.

So, I need your feedback maybe more than I ever have.

If you have interest in a magazine devoted to this subject, and you could have ANYTHING you wished for in it, what would you want to see?

Skip the part about you would like it to be free. I would like everything to be free, but I haven’t gotten very far with that yet!

Please use the comments to tell me what you would like besides that. If you are too shy to publicly comment, email your feedback to instructor@cre8it.com

I’m going to compare this feedback to what I have put in this issue and see if I am on track or should make some adjustments.